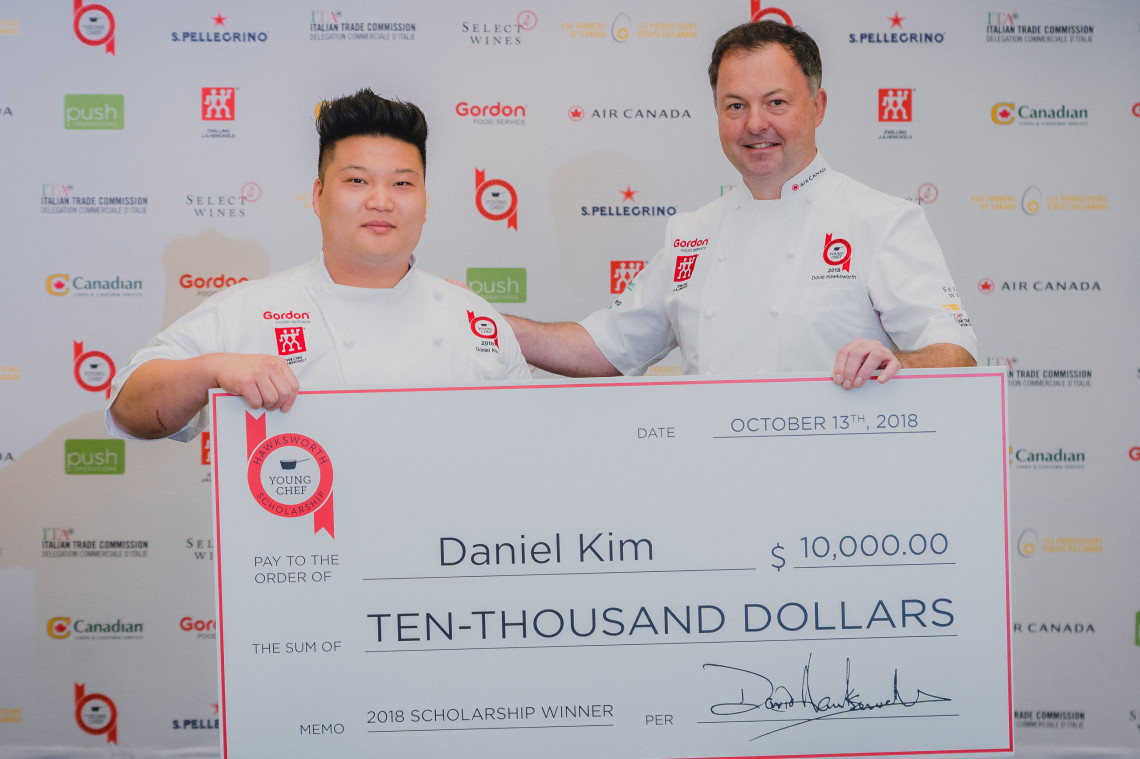 The Hawksworth Young Chef Scholarship Foundation is thrilled to announce Daniel Kim (24) of Vancouver’s Boulevard Kitchen & Oyster Bar as this year’s winner following the exciting National Finals held this past Saturday in Toronto. The winner earned the title, “2018 Top Young Chef of Canada,” a $10,000 grand prize, an ultimate cookware set from Zwilling J.A. Henckels, as well as an unparalleled opportunity to stage at a globally renowned restaurant.

Regional heats took place earlier this year in Toronto, Montreal, Vancouver and Calgary where the competition narrowed down 40 competitors to just eight finalists, who competed alongside Kim at Toronto’s George Brown College. While the panel of revered judges and culinary experts recognize each chef for their talent, ultimately, only one is named the Scholarship’s winner.

The winner’s announcement took place at the evening reception, held in The Ballroom of the Fairmont Royal York, which was followed by a night of celebration over delicious canapés and wine provided by Select Wines. As an honourable mention, Jordan Wilkinson (27) of Toronto’s Hexagon Restaurant and Michael Roszell (25) of Burnaby’s The Pear Tree placed in second and third, respectively, taking home $5,000 and $3,000 prizes. Roszell also took home the first ever Best Dessert Award presented by Cacao Barry – an all expense paid trip to the prestigious chocolate academy in Montreal to attend a masterclass of his choosing. New this year and awarded to a young chef with strong professional habits that will assist them in future leadership roles, Clément Bellaigue of Montreal’s L’Atelier Joël Robuchon received the Hawksworth Young Professional Award for his professionalism in correspondence and meeting deadlines, taking home a $2,000 prize provided by Gordon Food Service.

“Year after year the competitors impress us with their dedication and skill,” says scholarship founder, Chef David Hawksworth. “This year was no different, and it was fantastic to engage with our talented finalists in more meaningful ways beyond the competition itself.”

In its sixth year, the Hawksworth Young Chef Scholarship has expanded to include development and learning opportunities during the National Finals competition. The three-day participant program included an Egg Farm Tour at Mullet Koop Family Egg Farm, sponsored by Egg Farmers of Canada, followed by a welcome dinner and garden tour at the famed Langdon Hall with Chef Jason Bangerter courtesy of Garland Canada; a pasta themed master class led by Michelin-star Chef Luciano Monosilio sponsored by the Italian Trade Commission; and a chocolate workshop hosted by Cacao Barry at CXBO Chocolates with Chef Brandon Olsen. These unique experiences were offered as part of the scholarship’s goal to build a community where resources, ideas, information and advancements in the culinary field can be shared.

Beginning winter 2018, applications for the 2019 competition will be open to Canadian chefs aged 28 and under. Please visit www.hawksworthscholarship.com.